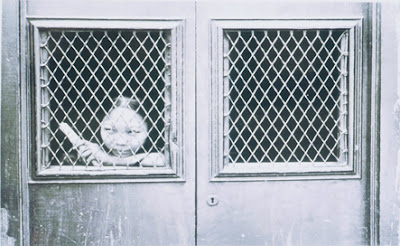 Last we spoke of Lilac Chen, the unfortunate girl from China circa 1893, she was on her way to San Francisco without anyone asking her whether sailing across wave to an entirely alien world was something she might care to do. A slave, Lilac had no choice in the matter. And so, we pick up her story as told by her from the standpoint of her own salvation by a missionary in San Francisco named Miss Cameron:

Oh, God has just been wonderful. Just think, I was in such close waters for damnation myself! This woman, who brought me to San Francisco,, was called Mrs. Lee, and she kept the biggest dive in San Francisco Chinatown. Oh, she had a lot of girls, slave girls, you know. And every night, seven o'clock, all these girls were dressed in silk and satin, and sat in front of a big window, and the men would look in and choose their girls who they'd want for the night. Of course, I  didn't know anything, never heard about such things, you know. And whenever police or white people came, they always hid me under the bed and pushed a trunk in front of me and then after the police had left they let me come out again. And I saw these girls all dressed in silk and satin, and they were waiting for their business, see. But I didn't know anything.

When this woman needed money, she had to sell me to another party. Everywhere I had been they were very kind to me, except this last place she sent me. Oh, this woman was so awful! They say she was a domestic servant before and was cruelly treated. She used to make me carry a big fat baby on my back and make me to wash his diapers. And you know, to wash you have to stoop over, and then he pulls you back, and cry and cry. Oh, I got desperate, I didn't care what happened to me, I just pinched his cheek, his seat you know, just gave it to him. The of course I got it back. She, his mother, went and burned a red hot iron tong and burnt me on the arm. Then someone reported me to the home. But they described me much bigger than I was so when they came they didn't recognize me. And then the woman who had reported to the mission said, "Why didn't you take her? She's the girl." They said, "She looked so small," and then they came back again. But even then, they weren't sure that I was the one, so they undressed me and examined my body and found where the woman had beaten me black and blue all over. And then they took me to the home. Oh, it was in the pouring rain! I was scared to death. You know, change from change, and all strangers, and I didn't know where I was going. Away from my own people and in the pouring rain. And they took me, a fat policeman carried me all the way from Jackson Street, where I was staying, to Sacramento Street to the mission, Cameron House. So I got my freedom there. *

Lilac became an integral part of Miss Cameron's work, helping the American missionary and rescue worker to find girls even less fortunate than herself and rescue then from where they were "... sold to work in the dives, or as domestic servants, and bring them to Cameron House so they could be free... When we went on a raid we always took several of our own girls with us to help. Generally I would follow Miss Cameron as interpreter and she and I would go into the house through a door or a window... Poor Miss Cameron, she never knew about these dives, you know. Scottish people, especially the refined, never discussed these things... So nobody told her, she was so innocent. These slave girls used to have terrific sores, and she had to dress the sores, you know. She never wore gloves, you see, and really, it's just the providence of God kept her from these diseases."

Lilac's admiration for Miss Cameron shines through like the innocence Lilac managed somehow to keep through all her harrowing, horrific experiences. Perhaps the saddest and most poignant fact that comes from the story of Lilac Chen is that children like her exist, and are being abused, neglected and exploited, even as I type these words. Slavery and its horrible consequences are not issues for historical research, they are very real matters of global economics that should be addressed far more explicitly than our current climate of "look the other way and we'll all feel good" journalism allows.

Thank goodness there are still people who will march into dives and rescue those who go unnamed, unknown and under-served.

Yes, it's amazing how many people have no idea that slavery is an evil that's far from extinct. Thanks for highlighting poor Lilac's story.

P.S. Great to see a return of Triple P!

At least Lilac Chen's story had a relatively happy ending, Pauline... Unlike that of so many others.

Ah, so glad you made the point that slavery is not something completely extinct. We'd like to think it is. Even I find my own mind drifting, as if in a daydream, thinking to myself, "This is awful but at least it doesn't happen anymore." But it does. I enjoyed reading more about Lilac Chen! :)