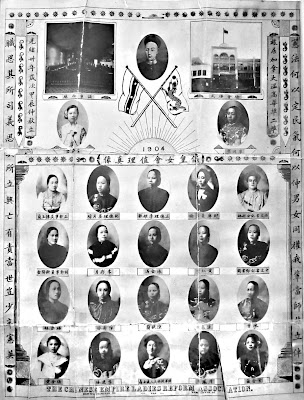 When women came from the far east, or Asia if you prefer, to North America, they were not always well treated and welcomed. Particularly children - both girls and boys - were used as sexual slaves and made into what they may not have been in their home state or wished to be for themselves.

The story of Lilac Chen, whose beautiful name does not resemble her unfortunate life, is an extreme example. Swept from her home and over the sea, she may never have amounted to much. But Lilac, a fighter, a survivor, made more of herself than most of us do. Thanks to the wonderful editors of Victorian Women, c 1981, we know a bit about this amazing child who fought so hard to become an amazing woman:

I was six when I came to this country in 1893. My worthless father gambled every cent away, and so, left us poor. I think my mother's family was well-to-do, because our grandmother used to dress in silk and satin and always brought us lots of things. And the day my father took me, he fibbed and said he was taking me to see my grandmother, that I was very fond of, you know, and I got on the ferry boat with him, and Mother was crying, and I couldn't understand why she would cry if I go to see Grandma  She gave me a new toothbrush and a new washing in a blue bag when I left her\. When I saw her cry I said, "\Don't cry, Mother, I'm just going to see Grandma and be right back." And that worthless father, my own father, imagine, had every inclination to sell me, and he sold me on the ferry boat. Locked me in the cabin while he was negotiating my sale. And I kicked and screamed and screamed and they wouldn't open the door till after some time, you see, I suppose he had made his bargain and had left the steamer; Then they opened the door and let me out and I went up and down, up and down, here and there, couldn't find him. And he had left me, you see, with a strange woman. That woman, it was suppertime, took me to Ningpo, China, to eat, and I refused to eat, I wanted to go home, and then she took me to Shanghai and left me with another woman. That woman never asked me to work and was very kind to me, and I was there, I don't know for how long. Then a woman from San Francisco came, and picked me up and brought me over.

And the horror has only begun for poor Lilac Chen. But that is all for tonight; isn't it?

Header:Ladies of Vancouver via China.org
Posted by Pauline at 10:14 PM

Being somewhat familiar with the works of Alex Haley, I've heard stories like this involving African Americans. But I was never aware of forced migration and slavery involving Asian children. It's harrowing. You're right about one thing though, Lilac Chen is a beautiful name. It somehow makes the story bearable. I'm glad someone cared enough, and had sense enough to listen to her story and record it.