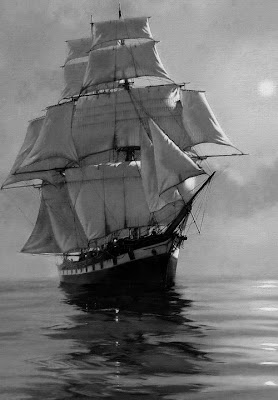 Ahoy Brethren! I hope this post finds you all in booty, wenches and grog... Or at least grog. I've missed you all and think of you often, honestly.

Today I'm sharing a recent find of shipwrecks in the Gulf of Mexico, that haven for Laffite, Beluche, Aury, Gambi, Youx and a hundred other early 19th century pirates/privateers who served the revolutionary states of Central and South America to various degrees of faithfulness.

This article from ABC online talks about a "thrilling" find of not one but three shipwrecks from around the Laffite era - circa 1810 to 1825. The ships are small, two masted, and carrying no more that eight guns. From the minimal information in the article, which as it notes raises more questions than answers, it appears that the ships may have wrecked in weather such as a gale or hurricane.

For me, a distant relative of Renato Beluche and an old archaeologist at heart and by training, this really gets the imagination running. Could one of these ships be the lost L'Intrepide, captained by Beluche before the War of 1812 and lost in a hurricane off the Louisiana coast some time in 1810 or '11? Beluche and his surviving crew were stranded for some weeks on Little Cat Island, which is now under water, and only rescued when another Laffite associate happened to sail close enough to the island to see their driftwood fires. The size and armament of the ships certainly raises the possibility.

A little knowledge is a dangerous thing, however. It may be too much to hope for, and perhaps just my wild, seafaring imagination taking me places that the same archaeologist in me knows I should not rightly go.

And yet, oh how exciting are all those possibilities...

Header: The Night Watch via Naval Architecture
Posted by Pauline at 3:14 PM 5 comments: