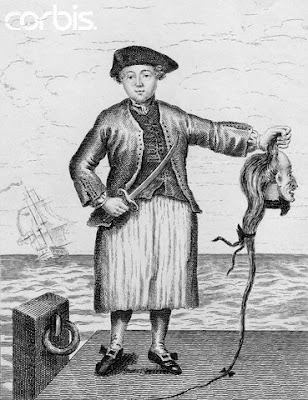 Among the female adventurers and candidates for military or naval glory, none in their time stood more forward than Ann Mills. By what chance, or in what capacity she first commenced her career on shipboard, is not known; but, about the year 1740, she was serving as a common sailor on-board the Maidstone frigate; and, in an action between that ship and a French enemy, she so greatly distinguished herself, by personal prowess, as to be particularly noticed by the whole crew. It is, by the circumstances of her portrait being taken with a Frenchman’s head in her hand, that we are naturally led to imagine the service she performed must have been of a most desperate nature, or of being boarded by the enemy; and probably, after the conquest cut off the head of her opponent, as a trophy of victory.


The above paragraph, with its period appropriate long sentences, is from James Caulfield’s Remarkable Persons. This fascinating, if questionable in authenticity, group of character sketches was published in serial form over the course of 1819 and 1820. The picture at the header, of sailor Ann Mills holding the head of her vanquished foe, caused somewhat of a sensation at the time and then the question arose; why haven’t we heard more about this woman? That inquiry has yet to be properly satisfied.

Who Mills was and where she came from remains a relative mystery. Caulfield simply assumes that “… some love affair induced this woman to assume the male character, in order to follow the fortune of a favourite lover who had gone to sea.” This was, of course, not unheard of and may actually have been more common than the lens of Victorian-written history would like us as their posterity to imagine. It was also not at all unusual for a poor girl to simply slip into the gender that was likely to make the most money. Regardless of Victoria’s imaginary world, men have always had a leg up in that area.

Caulfield lumps Mills in with other “notorious viragos” of her era including Anne Bonny and Mary Read, which may be the reason that she is often counted in modern lists of “lady pirates”. In fact, the very marginal information we have about her seems to point to her never turning to piracy proper. Although given her place aboard a Royal Navy ship in the 18th century, to call her a privateer would not be unreasonable in the least.

In his remarkably well researched book Villains of All Nations, Marcus Rediker skips the speculation about who Ann Mills might have been to dig deeper into why she and others became sailors and warriors. What drove a woman in a time of corsets and panniers to pull on pants and fight not just with men but like men? Rediker posits that it was the very nature of impoverished and often displaced women of Mills’ era and beyond to be strong, aggressive and daring in pursuit of perhaps not a better life but at the very least three squares a day. He writes that the “lower class female experience” was:

… a matter of course-bred physical strength, toughness, independence, fearlessness, and a capability of surviving by one’s wits. The prevailing material reality of working women’s lives made it possible for some women to disguise themselves and enter worlds dominated by men…

This paragraph appears in Villains on the same page as the above picture of Mills, although the general conversation focuses on Bonny and Read. The overall message is that women who chose to stand up and fight were not as unusual as modern popular history would have the average person believe. That in fact heroic acts of physical strength and personal courage – lifting bales of goods or pails of milk, giving birth at great personal risk, working long hours, fighting off assailants and so on – were practically everyday occurrences for the “lower class female” in the 17th, 18th and early 19th century. The main reasons Rediker lists for women taking the next step and dressing like men are economic necessity, adventure and, as Caulfield speculates in the case of Mills, love. Curiously the latter, which was probably not as typical as the simple need to put food in her belly, is often considered the most powerful motivator for behavior such as Ann’s.

Whatever the case, it appears that “about the year 1740” a woman possibly named Ann Mills and dressed as a man aboard “the Maidstone frigate” cut off the head of an enemy in combat. How she got to that point, and why, remains open to speculation as does what became of her from there.

Header: Ann Mills from Remarkable Persons via Corbis images
Posted by Pauline at 8:45 AM

Just found your blog from the Two Nerdy History Girls links- I LOVE reading about lady pirates! I wrote a little post about Sayyida al Hurra not too long ago. I wish there was more information available about them. Sayyida was a contemporary of Barbarrosa but there was WAY more written about him :( Do you mostly use online sources, or books?

Welcome, Keri and thankee indeed. I wish there was more information about these ladies too.

Sayyida in particular has some very tantalizing information "left out" of her story by history. What we do know only makes what we don't that much more frustrating.

I use books for the most part and I try to include title and author in the body of the posts (I'm not big on bibliographies in blogs; I'll save that for the published/paid for medium). When I use online sources, I make an effort to link to them as well.

Please stop by often and keep the comments coming; your input is and will be very much appreciated.

Excellent post, thank you. I will add the link on my blog.
Regards, Le Loup.
http://woodsrunnersdiary.blogspot.com/

Thankee indeed, my friend; and Happy New Year to you and your readers.

Ahoy, Pauline! Excellent post (as previously noted). I think the thing I find most amusing about it is the picture, in which she looks so matronly and pleasant... almost grandmotherly.

Watch out! Or Granny will be cuttin' off yer head, ye stinkin' frog...

I hadn't actually thought about her look but you're right. That'll keep the kids in line.

Interesting how economic conditions and prevailing circumstances of the times shape who we are. More than that, I think they show us what we're made of.

If given the choice Ann Mills, who I've never head of by the way so thanks for the introduction, might have chose an easier life or maybe she wouldn't have had it any other way. Now I'm thinking about my own life!

I love this story of a lady pirate cutting off the head of her opponent after a fierce battle. For many of us it's a metaphor - for her it wasn't.

What a thoughtful comment, Scott. It is a welcome addition to the post as a whole. I've a feeling that you, of all of us who contemplate her, may very well understand Ann better than most. Thank you.