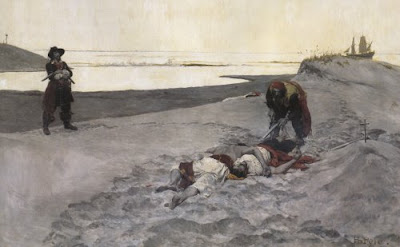 When we speak of pirates and privateers during the age of buccaneers we tend to gravitate to British, Dutch or French names. Henry Morgan, Laurens de Graff and Michel de Grammont come to mind readily. It is rare that a Spaniard – whose holdings in the New World were usually the targets of plundering buccaneer from England, France and Holland – comes to mind. So it was with surprise and delight that I sat down to read a chapter in Benerson Little’s most recent book about a freebooter who called himself Juan Corso.


Corso’s moniker in and of itself is something of a pun. Though, as Little notes, Corso was a common surname in Spain, it also translates literally as “privateer”. Corso’s name is the equivalent of a Frenchman calling himself Jean Corsaire or an Englishman going by Johnny Privateer. Since we know nothing about Corso’s childhood or early life, it is not a stretch to say that his name is an alias if not an out and out joke.

Much of the action that made up Corso’s career is educated guess, but he appears first on the historical record cruising under the command of Captain Felipe de la Barrera y Villegas. Barrera was at the head of a small flotilla of light, shallow draft “half-galleys” that were searching the inlets and lagoons off the Gulf Coast of Mexico for illegal logwood cutters. Men from the British island of Jamaica in particular made a living cutting down, chopping up and selling logwood surreptitiously in these areas. The Spanish, who considered the costly resource theirs alone, hunted these men without remorse. Even during peace with England, Spain marked the men criminals regardless of written passes they may hold from English lords.

This was the case in 1681 when Corso, along with his frequent partner Pedro de Costa, was among Barrera’s men as they cruised into Laguna de Terminos on the coast of Campeche. The logwood cutters were surprised and, though one of their number in the form of a British sloop named Laurel managed to escape, they were rounded up or slaughtered, their camp burned and their goods seized. Though Barrera initially promised the Englishmen safe passage, they were in fact packed into the holds of his ships and taken to Campeche where they were sold to the city as slaves. Most would be worked mercilessly in the sodden swamps around the city with little water and less food, their skin burned black by the sun, their feet riddled with parasitic worms and their bodies infested with fleas and lice.

Barrera made a tidy profit on this enterprise of human misery and Corso and de Costa may have decided they wanted to rake in the same kind of cash. The two men received a commission from the mayor of Campeche and, with a group of small ships or canoes probably amounting to no more than three or four, they headed south for the Gulf of Honduras. Here logwood smuggling was particularly heavy, and Corso and his mate planned to increase their odds of catching larger ships by the capable use of stealth.

Rather ironically they ran into Laurel, the British ship that had escaped Barrera, near Trujillo, Honduras. This time the Spaniards were victorious, boarding Laurel and seizing her small crew. Her captain, Robert Oxe, would later write that he fought two hours with the freebooters and that, when they did board, he offered them his legal commission from the Earl of Carlisle. Corso and de Costa, unimpressed, disposed of the papers. Oxe says:

They said that they would come to Jamaica, too, presently, and that they had taken five hundred English prisoners.

Though Oxe and his men would not fair as badly as the unfortunates who labored in Campeche, he was ordered tortured and beaten by Corso. He complained of being hung up “… at the fore braces several times, [and beaten] with cutlasses…” about the body and face. Little tells us that Oxe and eight of his men were finally set free in a single canoe.

Doubtless aboard their prize ship, now called Leon, Corso and de Costa managed to re-capture a Spanish treasure ship that had been taken off Honduras. They renamed Nuestra Senora del Honhon the Leon Coronado. With these two ships they went to work clearing the Gulf of Honduras of the logwood cutters, tallying up a fortune in prize goods. When they headed back to Campeche in triumph, they were sadly disappointed to find the mayor eager to accept their prizes after which he unilaterally sent them off to Veracruz. Despite Corso’s protests – for which he was briefly jailed – it would be months before the Governor of Mexico finally awarded him and his mates a share of their booty.

In 1682, the Spanish government reclaimed their treasure ship and Leon Coronado was made part of the Armada de Barlovento, the official pirate hunting fleet of New Spain. Probably frustrated at being slighted not only by the loss of his ship but by failure to be asked to join the Armada, Corso gathered a new set of small ships and headed for Cuba. There he began a systematic round of attacks on British and French buccaneers who stopped at the island for water and provisions. Corso sailed under a red flag of no quarter, according to Little, and he made a habit of torturing and killing the crew of ships that dared resist him. His depredations were so successful that the Governor of St. Domingue (modern Haiti) began issuing commissions against Spain at Petit Goave and Britain threatened to declare war against Spain once again. The sack of Veracruz, usually considered to have been mounted after the fate of the unfortunate logwood cutters from Laguna de Terminos was discovered, may have been just as much the result of Corso’s unchecked success in the Caribbean.

Corso retaliated for the brutal raid at Veracruz which, though largely the work of Petit Goave corsairs, he seemed to blame on the British. He raided the island of New Providence in January of 1684, leaving only a handful of people alive and free. The island sat uninhabited for three years thereafter according to Little. Corso also managed to virtually shut down sea turtle harvesting in the Caribbean causing a shortage of meat particularly in Jamaica.

Pressure from the Royal Navy in particular drove Corso away from Cuba and, by early 1685, he was back in Mexico and once again with his old mate de Costa. The two were sent out by the Governor to try and find the Gulf Coast settlement of French explorer Rene Robert Cavelier, Sieur de La Salle. The Spanish were antsy about any encroachment on their vast holdings around the Gulf. Who better to send as a destroying force than two notorious privateers? Though Cosro and de Costa seem to have thoroughly searched the shores of the Gulf, they missed de La Salle’s sad tent city at Matagorda Bay.

Corso kept up the search and landed at several points in the Florida. At Cape San Blas his flotilla hit rough weather, possibly a hurricane, and was wrecked with the loss of all ships. Little says that approximately 35 men walked ashore alive but without supplies, firearms and little in the way of clothing on their backs. Most died of starvation, injuries and exposure including Corso and de Costa. The rest, Little tells us, set upon the bodies of the dead, carving them up and cooking them “without wasting even the heads.”

Though Corso’s success against just about every nation who colonized the West Indies at the time was matched by very few, he is largely forgotten today. He was, to my way of thinking, a Spanish version of the notorious corsaire Francois L’Olonnais whose hatred for the Spanish led him to torture and murder. Corso, a strident Spaniard if not by birth certainly by nationalization, vented his wrath in turn on the British and French.

Header: Dead Men Tell No Tales by Howard Pyle
Posted by Pauline at 9:42 AM

Ahoy, Pauline! That story started out pretty funny and ended pretty gruesomely, as they so often do...

Man, no kidding Timmy! As you note, that is often the way with the freebooters of old.