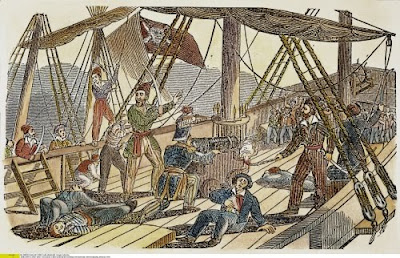 At least 90% of posts on notorious pirates could easily begin with a sentence like: “Little is known about the origins of [insert pirate’s name here]”. Quite honestly, nothing is different about today’s subject. Once referred to by a Spanish spy in New Orleans as “…the greatest assassin among all the pirates [of Barataria]”, Vincent (or Vicente) Gambi became a legend by first cruelty and then by association.

Probably born in Genoa, Italy some time around 1775, Gambi was obviously aboard ship at an early age. He may have worked on merchants going back and forth from Europe to the Americas and ended up stranded or voluntarily chose to stay in the U.S. when Jefferson’s bans on imports took hold in the early 1800s. Whatever the case, Gambi was captaining a freebooter by 1811, as court records in New Orleans clearly state (April, 1813 lawsuit brought by Paul Lanusse against V. Gambi et al). By that time, Jean and Pierre Laffite had a firm foothold in Barataria and their smuggling operation was hitting its stride.

Tradition, if not factual documentation, tells us that Gambi chafed under Jean Laffite’s rule. He may have used Grande Terre Island as a base prior to the Laffites establishing their leadership, and old bayou stories tell of Gambi challenging Jean early on. There is an apocryphal tale of Gambi egging one of his men on to call out Laffite, resulting in Jean appearing on the porch of his house and shooting Gambi’s thug between the eyes. Whether it happened or not, the incident is a favorite of Laffite story tellers; and Gambi seems to have been a favorite corsair in Barataria by 1813.

Small, broad-shouldered and “ugly”, with a scar above one eye (which one depends on who is describing Gambi), Vincent was a frequent visitor to New Orleans. The U.S. merchant Vincent Nolte, whose shrewish nature put him at loggerheads with Andrew Jackson during the Battle of New Orleans, famously wrote of “…Laffite the younger, Sauvinet, Beluche, Dominique and Gambi… time and again seen walking about, publicly, in the streets… and sold, almost openly, the wares they had obtained by piracy…” One can almost hear the red-faced frustration in those lines. Nolte, after all, had to add the high tariffs he paid the government to the price of his goods. The brothers Laffite and their ilk did not.

Gambi was also notorious, particularly among the Spanish, for his treatment of prisoners. Rumors held that he had a holding cell or pit on Grand Isle for passengers and crew of captured vessels. Here he could put them either to wait out a ransom or just get them out of the way. William Hosy, in a December, 1814 deposition in New Orleans court, stated that he and fellow passengers of a Gambi prize were kept there in “… the most cruel conditions” for some days.

Gambi obviously had a sense of humor, black though it seems to have been. In his sarcastically named Philanthrope, an hermaphrodite brig, he was notoriously good at bringing in prizes with cargoes of slaves. Like all the Baratarians, he went by several aliases the most amusing of which is probably Vingt-Cinque which means 25 in French and, when pronounced correctly, sounds very much like “Vincent”.

When Commodore Daniel Tod Patterson and Colonel George Ross raided Barataria in September of 1814, Gambi managed to escape. By then he was Captaining a sloop named Petit Milan which was burned or taken prize. The loss seemed not to trouble Gambi at all. By October he was sighted by Ross’ men on Grand Isle sorting prize goods.

When the Baratarians began coming out of the woodwork to sign up for service with Jackson at the Battle of New Orleans, Gambi was among them. For $8.00 a month and a potential presidential pardon, Gambi fought the British on Rodriguez Canal. He was part of Dominique Youx’s gun crew at Battery No. 3 and, like Captain Dominique, his service record shows that he was wounded in battle on January 8, 1815.

After the War of 1812 was over Gambi, like the Laffites, Youx, Beluche and so many others, had no time for presidential pardons. By mid-1815 he was back at the business of pirating while also smuggling cannon, small arms, ammunition and powder to insurgents in Mexico. He took command of one of the New Orleans filibuster ships, Eagle, and – though he did deliver the goods “the associates” gave him to the rebels near Texas – he took the ship and went about his freebooting.

He brought prizes into Galveston once the Laffites were in charge there, but it appears that he and Pierre in particular had a falling out. Pierre filed a petition in New Orleans court suing Gambi over a promissory note for $250 in 1816. Despite this, Gambi seems to have been one of the foremost suppliers of slaves to the Laffites’ trading sight on the Sabine River west of Louisiana. A tentative truce must have been worked out for the sake of profit, but there was no more strolling arm and arm in the streets of NOLA.

By 1820 the world of the Gulf coast pirates was beginning to crumble and Gambi, like so many others, would have been close to obsolete. Would have been, that is, if his own greedy and brutal nature had not caught up with him. Some time in September or October of 1819 he was aboard Eagle, by now renamed Petit Milan, and took a prize. He withheld a large portion of the prize money from his crew and, upon discovering this, they conspired against their captain. According to a brief piece in the Louisiana Courier of November 17, 1819, Gambi was sleeping off a binge on deck when one of his men decapitated him with an axe. As the paper puts it “… the very bloody axe which [Gambi] so often used.”

Vincent Gambi is an interesting if unfortunately typical case study of a pirate. Seemingly never interested in the veneer of legality – he rarely troubled himself with the letters of marque that were so important to men like Renato Beluche – his story is almost too bold and violent for his era. Perhaps he was born a century too late. Gambi seems more suited to the Golden Age of pirates than the privateering aspirations of Laffite’s Barataria.
Posted by Pauline at 9:34 AM

Hi, good article on Gambi. Many people think he was Italian, but he was not. He was French. Vincent's real name was "Jean Roux" as indicated on a court document found in the city legal records of 1815. The case is noted as Gourjon vs. Vincent Gamby aka Jean Roux.

Ahoy, Ozarklorian and thanks for bringing that up. I've seen and heard that one, too; not sure I'm buying it. There are many court cases, including Lanusse's and Pierre Laffite's lawsuits against him, listing Gambi as Gambi and not Jean Roux.

To me, it's very similar to the Brugman family assertion that Renato Beluche never existed and was actually their merchant ancestor Pierre Brugman.

Most, if not all, pirates/privateers had aliases and usually more than one, as you know. Much like the Dominique Youx/Alexandre Laffite (or is it Lafitte?) contraversy, we'll probably never know for sure...

Although, I'm gonna go out on the foremast crosstrees and simply state that Renato Beluche wasn't Pierre Brugman... and then write about it later. :)

Ahoy, Pauline! He may have been short and ugly, but at least he was violent! Which is a good trait for a pirate, but not for a long life, I guess...

Ahoy, Timmy! When you put it that way it sounds like our boy Vingt-Cinque would have made a good hockey player. "Hit somebody!"

I hadn't thought about it that way, but I guess he would. Although these days, you kind of have to be big, ugly and violent to be successful at hockey. Most of the little guys who are successful are fast and skilled. I guess he could be one of those instigator/pest types, though... I HATE those guys (unless they play for my team, of course).

Thank you for your helpful article on Gambi. Can you give me a cite for your proposition that Gambi reportedly used the French alias “Vingt-Cinque” (“Twenty-Five”).