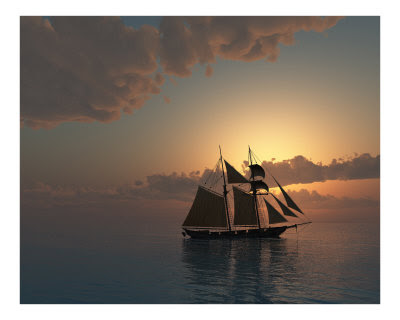 Saw a brig standing in for the land; at 7:00 PM discovered her to have a copper bottom, sixteen guns and full of men. At half-past nine o'clock she came alongside when a close action commenced. It was our misfortune to have our worthy commander, Captain Ropes, mortally wounded at the first broadside. I was slightly wounded at the same time in my right hand and head, but not so as to disable me from duty. The action was maintained on both sides close, severe and without intermission for upwards of two hours, in which time we had seven killed, several wounded and several abandoned their quarters. Our rigging was so destroyed that not having command of our yards, the Jack fell with her larboard bow foul of the brig's starboard quarter, when the enemy made an attempt to board us, but they were repulsed by a very small number compared with them.
~ William Gary, master's mate

(painting at the header: Schooner Ship by Dan Collier)
Posted by Pauline at 1:35 PM