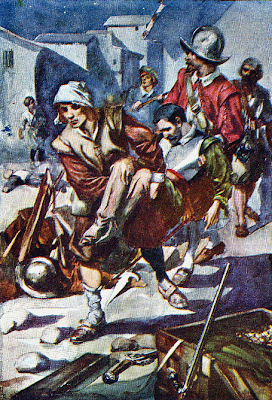 Ahoy, Pauline! I have to agree with you, while the whole story is filled with hyperbole, the part about the metal plaque seems especially far fetched, particularly since it is dated only a few days before Drake and his men "discover" it... Oh well, it is a fun story anyway, Pirate Queen.

Ahoy, Timmy! It is a good story, I think; strict adherence to the "truth" aside. It's certainly full of swashbuckling adventure. And what good are stories about pirates without swash and buckle?

Also, I neglected to add that "a jolly hot volley of shot" is an outstanding turn of phrase!