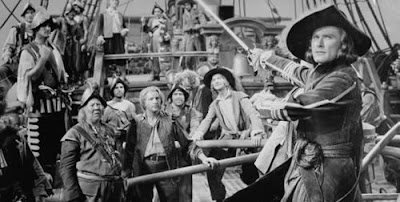 Today's buccaneer is rather like the high school football star who is, to the surprise of many, eclipsed at the 10 year reunion by that nerd who made it big in rock and roll (who knew he could play the guitar and sing?). If you say Laurens de Graff to most people today they might ask you if you've had a recent medical procedure. The six foot something model of the 17th century sea rover now stands in the ominous if physically diminutive shadow of Morgan, which is too bad really. Even though Jamaica's eventual Lieutenant Governor did have some awesome riffs.

Lauens de Graff is thought by most historians to have been born in Dordrecht, The Netherlands, some time in the 1650s. There is some debate, however, as to his actually genetic heritage. Some authors claim de Graff was a mulatto, saying that his name may actually have been assumed by him as a play on the word griffe, someone with African or Native American blood. It's an ongoing debate that, along with a few other points, makes de Graff very similar to our old privateering ami Dominique Youx. No one is sure where he came from or who he was, but his deeds speak louder than words.

It is known that de Graff went to sea young and aboard Spanish ships. Here he learned seafaring and picked up the working of the great guns. According to that famous buccaneer biographer Alexander Exquemelin: "One has never seen a better artillerist". He also witnessed the unfortunately common art of Spanish torture and sometime in the 1670s decided he was fed up. Either captured by boucaniers or deserting his Spanish ship voluntarily, de Graff joined the Brethren of the Coast at Tortuga and was raiding Spanish shipping by 1676.

By 1679, de Graff was Captaining the 28 gun brig Tigre and carrying a French commission from Governor Pouancay of Saint Domingue (now Haiti). De Graff was large and in charge. Standing about 6' 3" he was handsome, swarthy and blond according to Exquemelin. He was also reputed to be an expert swordsman and touchy about his honor. His fellows gave him a wide berth when he was in a foul mood or drinking but his success meant he never lacked for men. Or ladies (more on that tomorrow).

De Graff was also a busy buccaneer. Like Francois L'Olonnais he rarely took much time off and was all over the Spanish Main most of any given year. Unlike L'Olonnais or Morgan for that matter, de Graff was a sailor first and foremost and a sea raider because of it. He famously raided the 30 gun Spanish warship carrying the annual pay for the garrison of Havana in 1682, for instance. The following year he captured three Spanish warships that attacked him off Cartagena, and then sent the Governor of the town a note thanking him for the Christmas gifts. De Graff's rare raids on land were almost always in concert with other captains, Michele de Grammont and Nicolas Van Horn in particular.

The most famous of these was staged against the city of Veracruz on the Gulf Coast of what is now Mexico in May of 1683. De Grammont took the lead, with de Graff and Van Horn as his lieutenants, and the plunder and carnage were probably equal to Morgan's much more famous raid of Panama. Not satisfied with the take in gold and silver from the town, the three buccaneers decided to move wealthy prisoners to Sacrificios Island in the Gulf and demand ransom from the Spanish.

Things turned ugly when Spanish warships fire on the Island while the buccaneers were bringing food from their ships to feed their prisoners. Van Horn in particular was outraged and lined up a few likely hostages to decapitate in retaliation. De Graff steped in and said he wouls not allow the carnage. Van Horn questioned his courage and then it became a point of honor. De Graff and Van Horn already disliked each other over a previous botched raid on a Spanish treasure ship for which de Graff blamed Van Horn. What actually happened to set off the duel is still debated (I'm giving you Exquemelin's story) but the outcome remains the same.

"Voila," Laurens cried out, drawing his cutlass. Van Horn did the same and the fight on the beach commenced. It was not, in fact, a fight to the death but a typical French match to settle honor: a duelo. Laurens struck Van Horn on the wrist. Van Horn was then said to port en coupe or carry a blow and the duel was over. De Graff upheld his honor. Unfortunately for Van Horn the wound, which no one appeared particularly concerned about following the duel, festered. Nicolas Van Horn died and was buried, according to Exquemelin, at Cay Logrette on Sacrifice Island.

None of it seemed of much interest to de Graff. Once the Spanish finally ransomed the prisoners at Sacraficios he returned to raiding. He traded up to the 40 gun ship Neptune the same year. In April of 1685 he and de Grammont tried a raid on Campeche that ended in disaster as the Spanish were warned ahead of time. De Graff was met by an armada of five Spanish warships in the Gulf. Exquemelin calls Laurens the bravest of his crew as they faced down the impossible enemy before them. De Graff takes advantage of every opportunity and famously splits the armada in two, firing both his broadsides as his ship sails into the very center of the maelstrom. De Graff is wounded but will not leave the deck. Night falls at last and, to the buccaneers' surprise, the Spanish turn tail and run.

After another land raid at Tihosuco, de Graff seems to have decided to settle down. He briefly considered defecting to the English but finally settled on Saint Domingue where he purchased a plantation and became a French citizen. He was appointed to the local military by Governor de Cussy and defended Saint Domingue from 1691 to 1695 during the war against Britain. In 1699, after years as a settled planter, he joined Pierre LeMoyne d'Iberville's expedition to the Mississippi river as a pilot. Some historians claim he settled there, but it is almost certain that he returned to Saint Domingue, his plantation and his second wife.

De Graff died in 1704, leaving an estate worth approximately 200,000 livres to his wife and daughter in Saint Domingue's Quartier Morin. Pretty good for a pirate.

Though author Rafael Sabatini claimed to have used Morgan as his inspiration for the character of Peter Blood in the book (and later movie) Captain Blood, one has to wonder. The exploits of the pirate Blood mirror de Graff's at so many points right down to the famous sailing between two men-of-war, broadsides blazing. And then, of course, there is the duel on the beach between Blood and LeVasseur which mimics de Graff and Van Horn but with the fictional Arabella Bishop present to add titillation.

Exquemelin called Laurens de Graff "the great pirate of Petit Goave" and went on to say of him: "To resolve, to attempt and to accomplish, these are all the same thing to him." A freebooter like that is surely worth remembering.

But wait, there's more. Tomorrow the history and legend of the women in Laurens' life. Talk about titillation...
Posted by Pauline at 10:26 AM

Ahoy, Pauline! I was wondering about the picture of Errol Flynn at the top, but it all made sense by the end. I definitely see the parallels between de Graff and Captain Blood (other than the whole doctor thing... of course, Henry Morgan was no doctor either). Regardless, de graff was clearly an ass kicker. Another fun post. Thankee, Pirate Queen!

Ahoy, Timmy! Yes he was. It's rumored he also spoke at least four languages: Dutch, Spanish, French and English. Most buccaneers had a smattering of a t least two of those and could also communicate with natives along the Main. Not just an ass kicker, but an intellect too! (And did I mention tall and blond... ?)

You're a moron the way you steal information without crediting the source and try to bring historical awarness to piracy while burdening it with your cheesy commercial sterotypes of pirates. i'm assuming or at least hoping you've read barry clifford...get over yourself.

Ahoy, Anony and thank you so much for your input. I'll surely consider your advice.

Yeah, there's a moron here all right and it's you, Troll.

You are so brave posting comments anonymously and telling someone else to get over themself...