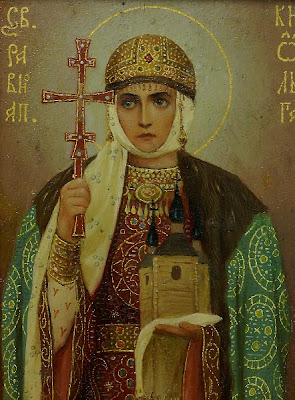 The life story of Olga of Kiev, who is now a Saint and "equal-to-the-apostles" in the Orthodox Church is about as far from what we imagine as "saintly" as one can get. Her ferocious treatment of the people who murdered her husband and her repeated grabs for land, wealth and slaves are at best unapettizing to the modern sensibility. But she was, beyond all that, a shrewd businesswoman, a capable leader and a woman - very much to her credit - who would protect her child and his entitlements at all costs.

Olga, or Helga in her people's native Norse, was born in the late 9th century to a tribe known as the Varyag. This was the early Russian word for Vikings and little Helga showed the heart of a Norsewoman from the very beginning. Married to Prince Igor of Kievan Rus at a young age, the alliance was intended to benefit both Helga's Viking father whose holdings appear to have been in modern-day Ukraine and the Kievan empire. Prince Igor's father, Prince Rurik, was just as much a warrior as Helga's Viking kinsmen; expanding his territory seems to have been his one occupation.

The absence of Prince Rurik left Igor and Helga, now Olga, in charge of the Kievan kingdom and they seem to have been well suited to the organization of a pivotal capital. In particular, both of the young monarchs were favored by the Kievan army making them virtually invulnerable to the oddly prevalent palace coupes of the day. It was a delightful 30 years of marriage and rule that produced a number of children. The name of only one has come down to us in the Primary Chronicle (which you can find, at least in part, online at the University of Washington website). This was Igor and Olga's son and heir, Svyatoslav.

Tragedy struck in 945 when Igor, now sole Prince of Kievan Rus, was out collecting tributes (essentially taxes in the form of coins, foodstuffs, textiles and slaves) among the Drevlyans. When he informed this conquered tribe that their taxes had gone up, the leaders of the group summarily executed their Prince.

Olga, now a middle-aged matron with a good bit of leadership experience and a large army behind her, hardly flinched when the rather forward Drevlyans showed up asking for her hand in marriage. The ambassadors sent to Kiev by the tribe wanted Olga to marry their Prince, Mal, and thereby take over the profitable Kievan holdings. A nod from Olga brought her elite guard down on the presumptuous Drevlyans who were corralled and buried alive in the Princess' back yard.

Thinking fast, Olga sent off a message to Prince Mal. She informed him that his ambassadors had insulted her. Not necessarily dismissing the marriage proposal out of hand, she asked that the Prince simply send his "best men" to discuss terms. Mal, clearly not one to understand tactics and/or blinded by greed, did as Princess Olga asked. When the Drevlyans arrived in Kiev, Olga graciously suggested that they cleanse themselves in her own personal bathhouse. This next wave of ambassadors accepted and, no doubt to their horror, were locked in tight. The bathhouse was then set on fire, immolating Prince Mal's "best men."

At this point the Princess, whose capacity for revenge and iron-willed intention to protect her son's birthright seem to have had no check, packed up a longboat and sailed off to the capital city of Drevlya. There she was welcomed by Prince Mal and she pretended that all had been arranged as far as their marriage. She also acted shocked that the Prince's ambassadors had not yet returned. Be that as it may, Olga insisted on hosting a feast for Mal and all his nobles. She had brought a Kievan wine in great vats that they simply must try. Try they did, to a point of falling-down drunkenness. And then Olga's faithful army descended on Mal and his Drevlyan nobles, killing some 1,000 of them.

Olga had something of Vlad the Impaler in her - or perhaps he had her in him; some historians say they were related by blood. She went out to the inhabitants of the largest Drevlyan city and told them that she did not fault them for the crime committed against her family. In fact, she would lower their tribute to the entire sum of one pigeon and one sparrow per family. Overjoyed, the Drevlyans happily complied, pulling sparrows and doves from the eaves of their wooden homes and the perches in their wooden pigeoners. When all the birds had been collected, Olga waited patiently until nightfall. Then she ordered her army to strap flaming tinder to each bird's feet and release them. As the birds returned to their nests, the city exploded in flames hotter than the sun. Olga took those who escaped the conflagration back to Kiev as slaves.

Continuing to rule Kievan Rus until the majority of her son, Olga seems to have kept her hand in politics even after Svyatoslav came to power some time in the 950s. Thereafter she travelled widely and, at some point, converted to Christianity. She traveled to Constantinople in 957 to be baptised and went on to Rome to request bishops be sent to Kiev to convert her people. Adalbert of Magdeburg responded to this call but left Kievan Rus disappointed, saying that trying to convert the Kievans was like trying to "teach a fox to read." His party was overtaken on his way back to Rome and all but three, including Bishop Adalbert who barely survived, were killed.

Nonetheless Olga continued her efforts to Christianize her people until her death around 970. Svyatoslav had been away conquering new lands when his beloved mother died and, despite his lack of adherence to Catholicism, he had Olga buried with a mass said by a second, apparently less taciturn, Roman bishop.

Saint Olga of Kiev, equal-to-the-apostles, was canonized in the Orthodox Church in 1547. It is no doubt due to her efforts to convert the people of her vast empire that she has been given so high an honor. Her actual deeds outside of the Church, however, speak of a ruthless but determined woman whose love for child and country could encourage epic ferocity. And to some degree, you have to admire that. Unless, of course, you're a Drevlyan...

Update: the outpouring of love for St. Olga has caused a few of us to form the Sisterhood of St. Olga Society. Please feel free to join us. Because it never hurts to have the ear of a Viking Princess.

Header: Saint Olga of Kiev icon via Pravoslavie dot ru
Posted by Pauline at 9:14 AM

Thank you. I am from Kyiv (Kiev), and I was pleasant to see this post here. :)

That is shocking, Pauline!

Wow, what a story! Felt like nine years worth of Sundays with Prince Valiant. Well told, Pauline. I shall offer prayers to St. Olga occasionally, grateful that she's on our side in the eternal struggle against dark forces.

SaintHQ: My pleasure; there is a lot to admire about St. Olga. Thank you so much for stopping by.

Timmy! Yeah; who in our family does Princess Olga remind you of?

Arthur: Well said, indeed. I will also be sending up the occasional prayer to St. Olga. The Devil would no doubt run from this lady.