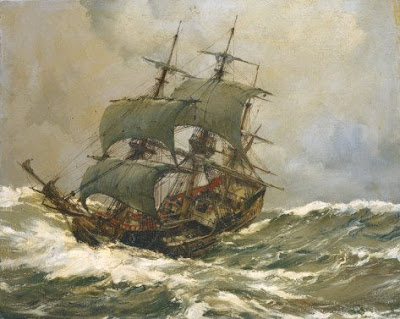 Last Wednesday we talked about staysails and how they began to appear on European ships in the 17th century. It probably goes without saying that researching that post led me to the myriad uses of the word stay at sea. And here is what I found, for the most part courtesy of our old friend Admiral Smyth and The Sailor's Word Book. Rather than paraphrase the master, here is the initial entry under stay:

A large strong rope extending from the upper end of each mast towards the stem of the ship, as the shrouds are extended on each side. The object of both is to prevent the masts from springing, when the ship is pitching deep. Thus stays are fore and aft; those which are led down to the vessel's side are backstays.

This is a point unfortunately missed in less well researched nautical fiction. In such cases, the afterstays are referred to as backstays. That's a mistake that will usually find me setting that book aside no matter how intriguing the story may be.

Stay can also mean to tack. Thus one hears of a ship "missing stays" when she fails to catch the wind appropriately to perform the tack. She is said to be in stays when she is actually in the process of successfully going around. As the Admiral points out:

A vessel in bad trim, or lubberly handled, is sure to be slack in stays, and refuses stays, when she has to wear.

And that will never do.

Stay apeek is a term which notes that a ship's cable and forestay are in line (the cable being attached to an anchor). This can be either good or dire, depending on the tide and weather conditions.

Masts that incline toward a ship's bow are said to be stay-forward. This is the opposite of rake, when the masts are inclined aft.

Stay-tackles are the rigging, which is usually able to be moved, which allows for hoisting boats and other items. These are generally, but not always, designated as fore and main to coincide with the fore and main yards.

And, of course, a staysail is a triangular sail attached to a stay. But I didn't really need to tell the Brethren that, did I?

Header: Old Timer in Rough Seas by Montague Dawson via Under the Black Flag on Facebook; the old timer's stays are clearly visible thanks to the incomparable artistry of Mr. Dawson
Posted by Pauline at 4:01 PM

I hope so; I'm trying out here.

Totally un-nautical, but now I have Oingo Boingo in my head:

Tell me this means something to you.

This is not a party, with prizes at the door...

I remember: "This is not a funeral, with mourners in a line..."

Dang, that song has just jumped right out of my head. Boo!