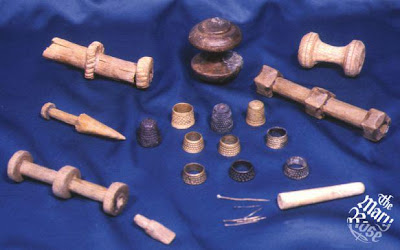 Over at the Mary Rose Facebook page, it's photo Friday. They pulled the gorgeous photo of bobbins, thimbles, needles and collars out for today's brief history lesson. Here's the caption:

For the crew of the Mary Rose, just as it is for modern military personnel, it was vitally important that you were able to make your own repairs to your kit, should they become damaged.

Four bobbins, made of ash, willow, alder and Scots pine, were recovered, and at least one may have been decorated with paint. All have three collars, one at either end, plus one positioned centrally, and are hollow with one solid end. Three were found with the original stopper, which prevented the contents (pins and needles, as was found in one example) from spilling out. Although none was found, thread would have been wound around the outside of the tube between the collars.

With the exception of one silver one, all the needles recovered were made of copper alloy, and all show signs of frequent usage. Four of them even show signs of resharpening!

The thirteen thimbles [ed. note: a great name for a band!] were probably originally made in Nuremburg, three domed topped, the rest righ-type, which left the tip of the thumb exposed. As these were used for heavy duty work, such as the sewing of canvas, there is no surprise that these were the most common!

Finally, at the top of the picture we have two chalk reels, used by the carpenters to mark a straight line. Nothing to do with sewing, but hey were in the picture anyway.

If you're puzzling over why thumbs would be left exposed to potentially painful impalement by a copper alloy needle, keep in mind that work with canvas would have been undertaken utilizing a sailmaker's palm. These would have been made, for the most part, of leather and would therefore not have survived to be included among the fascinating relics of Henry VIII's doomed Mary Rose.

Update: The generous folks at The Mary Rose Museum have given me a heads up that the above items are currently off display but will return when the new museum opens next year. Thank you all; we can't wait.
Posted by Pauline at 10:39 AM

Proving once again how versatile sailors have to be, Pauline...

Happy Friday to all the Brethren. Almost time for a mug 'o grog for me... ;-)

Well put, Timmy! You can't go to an "expert", necessarily, in the middle of blue water.