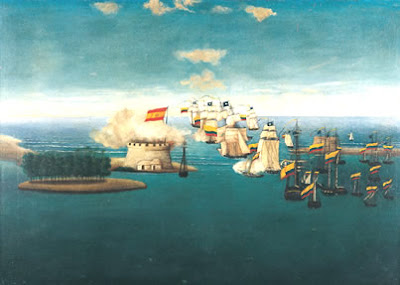 On this day in 1780, in an old style Creole house on Rue Dumaine in the city of New Orleans, my most illustrious ancestor was born. Renato Beluche came into the world the son of a French-Creole merchant and smuggler affectionately known around town as Big Rene. He would leave the world 80 years later as an honored veteran of both the Battle of New Orleans and Bolivar’s Revolution, as well as a Commodore in what is now the Venezuelan Navy. 103 years later, his remains would me moved to the Panteón nacional in Caracas where they rest to this day in sight of those of the Great Liberator, Simon Bolivar.

A lot of living – and a lot of sailing – went on for my Uncle Renato between birth and death. One of the highlights of a career full of privateering and freedom fighting was the Battle of Lake Maracaibo. History lists the date of the battle, fought mostly on the water, as July 24th. Actually, it occurred over almost a year from initial planning in September of 1822 to the evacuation of defeated Spanish troops in August of 1823. The lake and the city by the same name are now in the country of Venezuela. At the time they were part of the province of Gran Colombia.

Beluche was a Captain in Bolivar’s navy at the time and when, in November of 1822, he was given command of the largest ship in that small fleet and oversight of the blockade of Maracaibo, some local feathers were ruffled. As noted in a letter from General Mariano Montilla to General Francisco de Paula Santander:

Soublette has ordered that Beluche be given command of Constitucion. This has caused discord because Padilla’s disposition is not compatible with that of Beluche, Joly or Chitty [other men commanding smaller ships with Beluche]. They are our first and best officers of the squadron. We will see, and work with tact in this matter. In any event, Padilla will remain in command at Cartagena.

Jose Padilla, like his rival, was a sailor who had been aboard ship since his youth and known hardships including imprisonment by the British after the Battle of Trafalgar. Padilla was born in Rio Hacha, in modern Venezuela, and his Native and African blood made him a virtual symbol of Bolivar’s revolutionary vision. He bristled mightily at being usurped by Beluche who was not only his subordinate (Padilla was, by this time, an Army General) but a foreigner. Beluche had no love lost for Padilla either; he considered him a hothead who endangered men and ships at Maracaibo. It was only after the Battle of Maracaibo was put to bed that these two men really went at it and this time, in the press.

Thanks to the indefatigable research of Professor Jane Lucas de Grummond, we have the accurate cant and response of Beluche’s and Padilla’s literal flame war published in real time by local papers. The very public argument was sparked by Beluche hearing that Padilla was deprecating his contribution to the victory at Maracaibo and to the Bolivarian revolution in general. Padilla was, in effect, calling Beluche out as an opportunistic, foreign pirate.

In response, Beluche wrote a scathing article entitled “An Answer to False Accusations” in which he delineated Padilla’s errors in relation to his own service for Gran Colombia. The ball really got rolling when Padilla added his opinions and re-published the article. Beluche in turn commented on Padilla’s input and so it went until, like a vitriolic comment thread on a political blog, the two men ground each other down in amusing if unbecoming fashion.

Here is some of this discourse as printed in de Grummond’s scholarly biography, Renato Beluche: Smuggler, Privateer and Patriot.

Original article by Beluche: I was born in the new world and acquired a love of glory in the defense of her liberty. Scarcely had the cry of independence gone up from South America when I hurried to enlist myself among her defenders.

Padilla: What Senor Beluche says is true. He did come to South America but as a corsair; that is to say, to serve his own interests.

Beluche: Padilla remembers that I was a corsair. And what is the matter with that? If I served my own interests and at the same time those of Colombia, what more could one desire? His Excellency is ignorant of the fact that uniting public and private convenience is the essence of government.

Original article by Beluche: I have the satisfaction of having taken part in actions which it is not necessary to mention, for which I was praised by my chiefs. Envy has never found a resting place in my breast; and the brilliant actions of my companions in arms, far from exciting any base passion in me, had only stimulated me to imitate them.

Padilla: Senor Beluche’s deportment has not corresponded with this expression of his sentiments.

Beluche: This note is so vague and insignificant that it does not merit a reply.

This snippy backbiting goes on, when all comments have been added, for twenty-five pages. It is interesting to note that Padilla uses the honorific Senor but not the title of Captain when addressing Beluche and that Beluche addresses Padilla correctly as General in his original text but not at all in his responses. Neither man was going to back down.

For me the entire episode is a little funny, a little sad and a lot human. When a long gone ancestor jumps off the page with a fresh voice and a clear purpose, it makes them live again. For that I am grateful regardless of the words or the sentiment. I’ll bet Padilla’s descendants feel the same way.

Happy Birthday, Uncle Renato. I’m sure you were much missed when you left this Earth, but you’re always right here with me.

Header: The Battle of Maracaibo by Jose Maria Espinosa Prieto c 1840
Posted by Pauline at 11:16 AM

A very cool ancestry you have, Pauline. I envy you.

If I ever tried writing up my family's history, it'd probably read like the Newgate Calendar. Without the laughs.

Ahoy, Undine and thankee indeed. Uncle Renato is the big dog, though. Most of my ancestors are still completely faceless as far as history goes and/or much less reputable (and you can see how questionable Beluche was in some folks' eyes...)

A shot o' rum in honour o' the ol' seadog...his spirit lives on in ye and in history shared!

Ahoy the Captain and Ozarklorian! I'll agree with you both, and raise a glass to a great man with a great purpose (and a hell of a privateer)!

Ahoy, Pauline! And a belated happy birthday to your Great uncle Renato! I hope that someday we may visit his resting place...

Ahoy, Timmy! Me too; both at the Panteon and the original cemetery in Puerto Cabello. If nothing else, it's a sure bet I'll get to take you on a tour of his birthplace sooner than later.

Paula,
I think that Jane De Grummond mentions in her book that one reason that Beluche's remains were moved was because a highway or large boulevard was built were he was originally buried. I have been to the Panteon Nacional and have pictures of it and the marker in the floor where he is buried. (see my genealogy website: www.genealogy.com/users/j/o/h/Alfred-P-Johnson/index.html)

Ahoy, Alfred! You're right; Dr. De Grummond does mention the highway that now passes through Puerto Cabello. I believe that she was not necessarily implying that the highway was the reason Monsieur's bones were moved to the Panteon. For instance, she mentions that Madame Beluche remains buried under the marker erected by her husband in the same cemetery.

While I'm not trying to make more of Commodore Beluche than he was - any more than he would have - I do believe that he is undervalued in his native U.S., both as a hero of the Bolivarian Revolution and the Battle of New Orleans. It never hurts to shine a little light on the prouder corners of our ancestory.

And, with the luck, I hope to visit that little corner of the Panteon that holds what is left of a pretty amazing guy. And then I'll stop by and pay my respects to the Liberator. You know... as long as I'm there :)