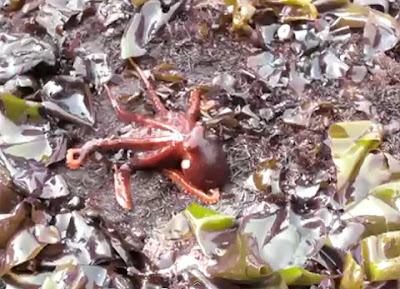 Last week, the First Mate sent me this brief but intriguing article from Yahoo! News. Entitled “Video: Octopus crawls out of water and walk on dry land,” and containing the eponymous video, it is probably no surprise that the piece itself is rather short. After all, a picture – or in this case a pretty amazing video – is worth a thousand words.


I am personally rather fond of octopi (yes, I did look it up; “octopi” is the correct plural). They are very interesting looking, intelligent, dexterous and painfully shy. The only animals they can tolerate being around for any length of time are the ones they like to eat. And that’s the gist of the article and the video. Evidently, a hungry octopus will happily drag himself over land to get to a tasty morsel.

That’s not all by half, though. A second article referenced in this one chronicles the experiences of researcher Alexa Warburton with a Pacific octopus named Athena. From the article:

Octopuses in captivity actually escape their watery enclosures with alarming frequency. While on the move, they have been discovered on carpets, along bookshelves, in a teapot, and inside the aquarium tanks of other fish – upon whom they have usually been dining.

Think about that for a minute. These things are like aquatic zombies. I’m thinking of pitching a new show to AMC: The Walking Octopi. Eerie.

Header: The octopus featured in the video, walking
Posted by Pauline at 8:47 AM

Ahoy, Pauline! I for one welcome our new octopus overlords...

No kidding, huh? I wonder if the prehistoric giant variety did this too...

Good one. I believe octopus pie is actually a popular dish in one of the Italian port cities, but which one escapes me now. Better to eat them than let them eat us, I guess.