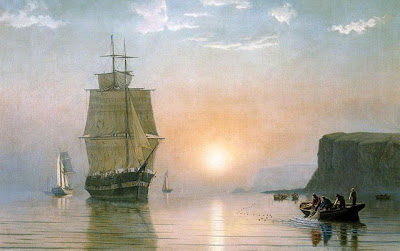 To launch something is, in the general vernacular, to push or throw it. When dealing with ships that push is generally into the water. The word itself has two specific ancestors according to how it is being used, or so Webster tells us. The Old French word lanchier, meaning to throw or to hurl is probably the origin of the launch a boat use, while the Portuguese word lancha, possibly from the Maylay lanca, means a type of boat.


At sea, a ship is said to be launched when she “descends into her native element.” Things can be launched as well but generally speaking aboard ship launch means to move more than to throw as in “launch the tar bucket aft”. A launch is a ramp that allows a ship or boat to be launched. Launching ways are the timber platforms placed on the incline under the bottom of a ship. Sometimes known as bilge-ways, these platforms keep the ship upright while she is ashore for repair.

A launch was and to some degree still is the largest boat in a man-of-war. The launch is usually longer and more flat in the bottom than a merchant’s long-boat or a fishing boat. This makes it more fit for rowing rather that sailing, thus its use in work away from the ship such as laying out line or cable or going ashore. A large man-of-war would have employed five or more boats including a launch, one or two cutters, a jolly-boat, the gig, usually reserved for transporting the captain, and a dinghy.

Launch ho! is an order that, perhaps surprisingly, has nothing to do with putting anything in the water. From The Sailor’s Word Book:

The order to let go the top-rope after the top-mast has been swayed up and fidded. It is literally “high enough.”

This is a precarious operation and one best done while at anchor when it is necessary to accomplish it at sea.

Header: Sunrise at Grand Manan by William Bradford
Posted by Pauline at 3:23 PM

Ahoy, Pauline! I like the expression about the ship "descending into her native element.”

That is nice. Thank you Admiral Smyth.